A complete instrument is composed of several major parts and subsystems, here listed bottom-up. The hardware comprises the lowest layer. The top layer is the application software which provides the look-and-feel of the instrument. The firmware is in the middle. From the software standpoint the firmware is very much the same as the real hardware, because both the physical hardware and the firmware are composed of logic elements, whose place of residence is secondary. For the software it does not matter whether a given piece was soldered to the board (hardware), or declared in the HDL (firmware). The following layers comprise the computerized instrument.

The bits and pieces listed above do not need to be developed in sequence. The major development steps can proceed in parallel thanks to a rich repertoire of available development tools. For example, Oberon system software can be worked out under a RISC5 emulator running on a regular PC. B2 development can be continued under the Linz V4 environment, hosted under Windows or Linux. Customizing B2 to the needs of the table top DAQ can be completed under an emulator without accessing physical ADC hardware. In the past I developed the Gr Data Acquisition and Monitoring Toolbox for BlackBox, using this approach. (Click on the preceeding link, and scroll down to Gr.)

Two years ago I was thinking that hardware had to be developed first, followed by firmware, system software, and finally some cool applications. In other words, I followed a bottom up approach. But now I think that a more efficient path will focus on the software, taking advantage of available emulators. Using an emulator we can refine the system drivers, display, user interface, as well as the graphical B2 framework which will be used in research instruments.

An important prerequisite for efficiently using the emulators is that the board(s) and the emulators remain in synch. It can be realized if the future firmware keeps all the original peripheral addresses intact, because these are hardwired into the emulators. Later on we will hopefully learn how to modify the emulators, or at least one of them. (Michael's emulator, because it supports a color display.) We will then be in the position to release the hardware board, its firmware, and a modified emulator accurately representing the instrument. Until this happens we will simply stick to the original addresses in firmware.

The Most Recent RiskFive Firmware.

The most recent RiskFive firmware was developed by Vedant Karia under Vivado 2018.3 (64-bit). It is available from the following link (file size 7,337 kB). Despite the name "final" it is far from being finished. There are still some subtle timing issues which we did not resolve before Vedant left. The original Oberon System software could boot under this firmware, but then we could not make the mouse and the keyboard to work. A few months later I discovered that the mouse and keyboard register addresses were swapped in Input.Mod at the software side of the Oberon System. This is where the work has stopped at the moment.

Before outlining the detailed plan we need to thoroughly asses the overall situation with the FPGA Oberon. It was originally developed as a one-off effort preserving the original 1992 Ceres Oberon System architecture within limited resources of the Spartan-3 Starter Kit. Despite its frugal design, the SoC firmware filled 95.4% of the FPGA, leaving no space for any extra firmware components. The design did not provide for a firmware extension framework such as Wishbone, because there was no space to add any extensions anyway. A few essential peripherals were mapped through registers spaced four address locations (16 bytes) apart.

The following peripherals were mapped in the original Oberon SoC at the high CPU memory addresses (FFFFFFxx in hex notation): a millisecond counter, switches and LEDs, serial RS-232, SPI, PS2 keyboard, and PS2 mouse. There were no explicit provisions for adding extra peripherals. It was implied that the adopted addressing scheme will be either applied as is, or somehow modifed while adding new peripherals, but the specification was not provided. The original addressing scheme will be fairly restrictive when adding complex peripherals with larger numbers of control registers.

Oberon SoC coding style is compounding the problem. The register addresses were not factored out into a separate file or a Board Support Package (BSP), as it is customary in the FPGA industry. They were rather hardwired directly into the top level HDL file in a very peculiar fashion. For example, the memory address of the system counter (address FFFFFFC0) was decomposed in Verilog into 03FFFF plus separate lower bits, because the most significant address bits were not routed outside the CPU. There were no comments in the Verilog code explaining the reason for writing 03 rather than FF for the most significant bits.

To further compound the problem, the same address was accessed as "-64" in the software, because Oberon language lacks support for unsigned 32-bit integers. It only supports the signed integers, where the highest bits "FF..." represent a negative signed number. This kind of coding discrepancies would have been less confusing if they were thoroughly documented in the code, which however was not the case.

We are also facing two more related problems. Fortunately, they can be circumvented, as I will describe below. So now we need to overcome these limitations if we want to develop useful applications running on more powerful FPGAs, larger memories, additional peripherals, and better graphics. A brute force approach would consist of fixing the source code in all relevant places: the SoC firmware code, the software drivers, and the emulators. It can be done, but the problem will return with every fresh release of the tools by other developers who do not deem such modifications desireable to pursue their own goals. So we need to figure out a more conservative development path.

We want to achieve the following goals, while fullfilling the constraints. 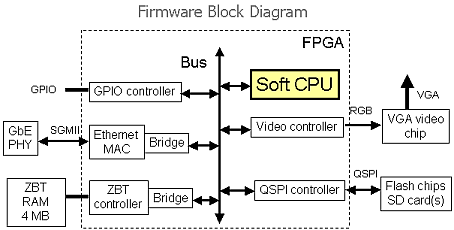 Figure 1. Conceptual block diagram of the firmware. The SGMII interface is unlikely to work with RiskFive protypes because of the speed grade of the soldered Artix-7.

Note that with Vivado you can migrate up, but not down. Later Vivado will open the earlier project versions, but it will not save its own projects in the older format. Never mind. If you have all the sources then you can recreate the project by hand.

Many IP cores listed below have been completed by the community. Many valuable cores are available on the Open Cores website. In such cases we only need to gather the results, document the status, and post the web pointer on our own website with proper credit.

General. Document how to use Vivado and ChipScope with Artix-7. We will need to read or write the BRAM memory content and the FPGA registers to aid debugging, load new software for the soft CPU, and test the newly developed firmware cores in the circuit.
General. Use external ZBT memory for color VGA graphics. Modify the graphics display firmware from one bit per pixel to eight bits per pixel, using external ZBT memory. Develop a lookup table which maps the 8-bit pixel to 24-bit word driving the VGA video DAC.

General. Implement QSPI interface for the SD card. This step is optional, though highly desirable. The SD card can be connected to the FPGA with either the SPI or the QSPI with four times higher throughput. Develop this interface to improve throughput.

Note: A similar solution been completed by the developers of Astrobe for RISC5. It is quite possible that we only need to adopt the Astrobe version of RISC5. Otherwise, we will do the following.
Oberon FW. Port the Oberon SOC firmware to Artix-7. Identify and assess the most recent version of the Oberon SOC. Port the SOC to RiskFive. This step is preserving as much of the original firmware as possible, without any significant modifications. Apart from remapping the FPGA pins, we need to migrate to the ZBT memory.
Oberon SW. Develop Board Support Tools. Thoroughly document the Board Support Tools for compiling the firmware, loading into flash, compiling the software, and loading onto either the SD card or flash.

Oberon SW. Partition the Oberon System software into the inner core and outer core. Note that this step has already been completed for Astrobe. It may be thus sufficient to adopt and build upon the Astrobe solution. Otherwise, complete the following steps.

Oberon SW. Test Oberon software on the board with VGA. Use the VGA display with the Oberon System.

Next steps. To be continued.