Overview of the RiskZero FPGA Workstation Single Board Computer

RiskZero is a "younger cousin" of the full RiskFive. The board was designed to run the single user Workstation Oberon System described in the Introduction to the Risk Project.

RiskZero is a complete workstation capable of running the real time Oberon System with its own GUI, keyboard, mouse, and a local file system. The OS can self-compile itself on the very same board. Cross development is also possible. Several PC-based emulators are available where one can develop software and download it to the board for execution.

RiskZero is open hardware. All the design files are available under the same license as the Oberon System itself. Anyone can make the RiskZero clones or modify the design for particular needs. The PDF schematics, the OrCAD schematics and layout, production gerbers, and the BOM are released on a separate page. 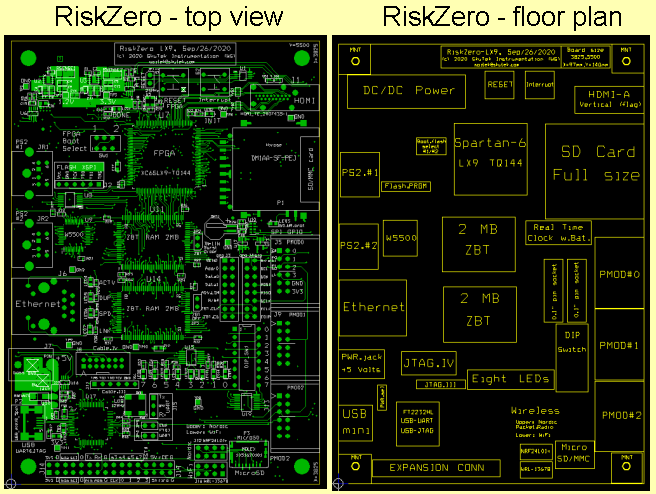 It is notable that the FPGA is the only major logic on this board. (Well, almost. Wiznet W5500 is used to offload the mundane TCP/IP processing away from the FPGA.) There is not even a trace of the conventional CPU other than the FPGA itself. The entire operating system is executed by the FPGA.

Applications: Reconfigurable is the keyword of the FPGA-based designs. The central FPGA can implement the so-called soft CPU's of varying levels of complexity, from a very simple 8-bit microcontroller, all the way up to a 32-bit CPU with floating point operations implemented in firmware. This board can be thus configured for a variety of applications, either simple or very complex. Running the real time OS with a graphical user interface, file storage, a compiler, and a run time system is just an example of what the FPGA-based hardware can do.