Our Goal: Efficient Architecture of the FPGA-Based Instruments

Synopsis. We aim at creation of programmable instruments for science and education. The instruments will use Field Programmable Gate Arrays (FPGA) running a real time FPGA Oberon Operating System with the help of an embedded soft processor core named RISC5. (It motivated the name of this website.) Other soft cores running some other software are of course possible, but we will mostly focus on Oberon.

Background information. The single user workstation Oberon System was originally developed in mid 1980's. A new edition of this OS released in 2013 is running on the soft processor core which takes only 4% of logic resources in the Spartan-6 XC6SLX150. The entire operating system, including a compiler, run time library, and graphical GUI, can run in a single megabyte of RAM. The system without the GUI can run inside the FPGA, without using external RAM. The combination of the small processor core, efficient run time library, and modest memory requirements, will help to develop instruments using inexpensive mid-range FPGA chips.

Why are we using FPGAs, anyway? There are three main reasons we are using the FPGAs in our instruments.


There are two major variants of the FPGA Oberon System. The Workstation Oberon System comprises the solid state disk (i.e., the SD card), mouse, keyboard, and video monitor display. Other components can be present as well, such as Ethernet or wireless. The workstation software comprises the compiler, loader, run time system, device drivers, and the graphical user interface. In this configuration, the instrument becomes the development system, providing for extremely rapid development of one-off scientific applications. 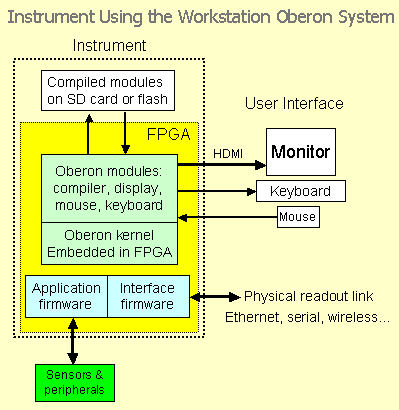 The Embedded Oberon System cannot be used for self development because it lacks the video, mouse, keyboard, and the on board compiler. Software is rather cross - developed on a PC, and then downloaded to the target board. The embedded Oberon System can run in kilobytes rather than megabytes, using the on-chip Block RAM (BRAM) for execution. Other components can be present as well, such as Ethernet or wireless. In this configuration, the instrument becomes the development target, providing for deeply embedded data processing or control of any kind. 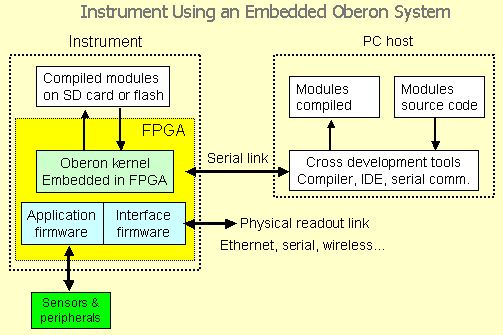 Other pages of this website describe the RiskFive project in great detail.